Human beings have been living beyond our means for some time. We live on one planet, with finite resources and limited capabilities. Over millions of years, the earth has regulated all living species in a complex web of interactions, no one species became dominant and all existed in a state of relative harmony. But since the industrial revolution, the earth has come to be controlled by just one species, throwing that equilibrium into question.

For centuries, humans have affected the landscape: logging forests, creating agricultural systems and urban areas have helped our species to thrive. But through the rise and fall of civilisations, humans have always been living at the mercy of nature and our impacts were minuscule in comparison with the magnitude of planetary systems. However, the discovery of fossil fuels and the dawn of the industrial revolution has driven humanity to become dominant over the earth and the species that we share it with.

Humans have transitioned from being a participant in the earth’s systems to being the driving force of change. From being just a cog in a mechanism to embodying the whole machine. Hence, we are now in the Anthropocene, the geological epoch where the actions of humans will be eternally visible in the rock formations. Millions of years from now, we will be marked out as the civilisation that released the carbon; carbon stored beneath the earth’s surface for aeons, released in just a few decades. The civilization that freed the carbon to the atmosphere and in doing so were granted untold luxuries and previously unfathomable possibilities.

The geological mark left by human activity is not a pretty one. Alongside carbon dioxide, it also includes nuclear weapons, mass extinctions and most peculiarly, chicken bones. Since the mid-20th-century humans have consumed colossal quantities of chicken, the domesticated chicken currently has a global population of around 21.4 billion. The carcass and bones that we leave behind which frequently go into landfill will eventually become buried, however, they will never disappear. Civilisations millions of years from now will look back in time through rock formations and see a spike in the number of fossilized chicken bones.

But it is not just what we have added to the environment that will come to symbolise the society we exist in today, but also the things we have taken from it. Biodiversity loss, deforestation and resource depletion will also tell our story to citizens of the future. It is these factors and more than researchers have categorized as Planetary Boundaries, the limits set by the earth in which humanity can continue to thrive. After passing a certain threshold of these values we are treading into unchartered territory, where the potential risks are complex and unknown. But if we continue to ignore these boundaries, we are consciously climbing over the safety fence and into a minefield.

Since 1950 there has been a nearly exponential growth of many factors, including GDP and population, and resource use. There has also been a mirrored increase in environmental indicators such as surface temperature, ocean acidification and the concentration of greenhouse gasses in the atmosphere. Things are getting better and better, and worse and worse, faster and faster. These trends are what have come to be known as the great acceleration, the beginning of the Anthropocene. 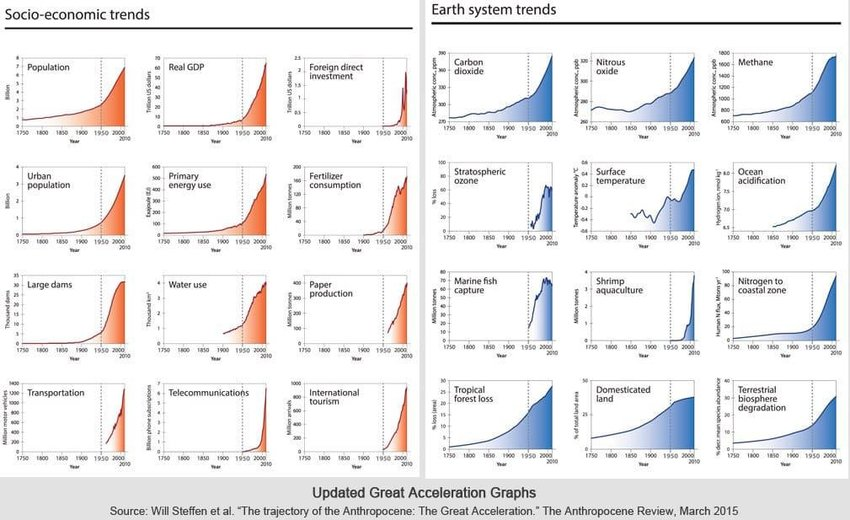 Humans have reengineered the planet to suit our needs. 75% of the land is now utilized by humans for agriculture, mining, industry and urbanisation. We have cleared 85% of natural forests, forests that we rely on to absorb 30% of our carbon emissions (this documentary explains more). Due to our fossil fuel emissions, atmospheric CO2 is set to reach the highest levels for 15 million years, a state that our species has never existed in before. The last time atmospheric CO2  was at this level, the globe was around 3-4℃ warmer and the sea level was approximately 20 meters higher than it is today. We are engineering an environment where we can not even survive, let alone thrive.

The current way that we are altering the natural environment is unmatched in scale and magnitude compared to any other time in history. The creation of the Gudong sea wall in the south china sea is one of the greatest examples of humanity completely missing the irony in their behaviour. China, the country responsible for 25% of annual CO2 emissions, is building a seawall to protect itself from rising sea levels, helping to secure oil and gas reserves in the area. However, when these fossil fuels are extracted and used, it will facilitate the sea level rise that they are trying to defend against by making the seawall. Despite China being the country with the greatest emissions, when the figure is calculated per capita it scores significantly below other developed nations such as Australia, Germany and the USA; the nation responsible for the most CO2 emissions throughout history.

A similar example of the disregard to the natural environment by humans is the development of the Arctic tourism industry, an area that used to remain inaccessible due to ice is now open to cruises. This has created an ethically questionable tourist destination for those wealthy enough to experience the arctic. The problem being that the tourism industry contributes to the demise of the arctic, which in turn makes the once frozen landscape more accessible, resulting in more people traveling there. This creates a reinforcing cycle that contributes to the demise of the ecosystem that the industry is exploiting.

Humans extract between 60 – 100 billion tons of resources per year. In that same time, we create equally high amounts of technofossils: plastic, concrete and metal that becomes permanently fossilized in the earth’s crust. Closer to the surface, soil degradation has also become a major problem, which is linked to the massive algal blooms in coastal areas. While society continues in a machine-like fashion, we find ourselves in the middle of the 6th mass extinction. Thousands of species that have survived for millions of years are being wiped off the face of the earth by the behaviour of one species, us.

These examples demonstrate how human behaviour demonstrates no care for the earth, this must change if we can have any degree of certainty about the future of our home. The future is currently characterised with great uncertainty, uncertainty which is exacerbated by human activity transgressing the planetary boundaries. Further, there is no comfort to be found in where we do find certainty, as increased extreme weather events, sea-level rise and record-breaking temperatures are certain to become more common.

We are not completely without light during this dark time, there is a lot of positivity to take from even the most concerning graphs and figures. Putting the breaks on the great acceleration and staying within the planetary boundaries is possible, although far from easy. The need to transform global economic systems is paramount, the requirement for a slower way of life is of the upmost and the call to action is for all citizens of the earth. We require a collaboration of the greatest minds to sever the connection between human wellbeing from its relationship environmental degradation.

Looking to the future, it is imperative that national governments and transnational bodies recognise the importance of adhering to the planetary boundaries when creating policy. Business as usual is not going to work, we cannot use the same thinking that got us into this predicament to get ourselves out of it. Whatsmore, this new system must be able to deal with a global population of up to 10 billion people. A considerable redesign of the economy, agriculture and society is required to sufficiently change the path we are currently on. Without which, we will be climbing over the safety fence and into an environmental minefield.

Next article A Top-Down Approach, Driven From The Bottom